ADOPTED! Peg had surgery and has been adopted!

Please enjoy the video below to see how beautifully Peg has adjusted to having three legs. Her right front leg was severely deformed causing her mobility issues. Because of the generosity of HCN supporters, we were able to provide her the surgery to remove her leg. Peg recuperated in a loving foster home re-learning how to enjoy being a cat.

​When we first met Peg, she was pregnant and soon gave birth to five tiny kittens. Scroll down to read her story. Thanks goes to everyone who supported Peg these past several months!

Peg and her five kittens! 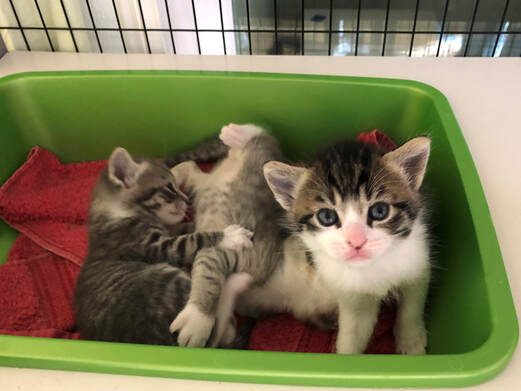 Peg's five kittens when they were still unweaned.
Peg was a homeless, special needs cat who arrived in a San Mateo backyard. One of her front legs was severely deformed and she held it close to her body. The homeowners had no idea she was also pregnant! Soon she delivered a litter of five kittens. With so many mouths to feed, the mother cat now named Peg, needed help fast.

Homeless Cat Network stepped in to provide a safe, clean space for Peg to care for her babies. She had privacy, a cozy nest for nursing, and plenty of food and water.

The kittens are healthy and all have been adopted!
By clicking the DONATE button below, your donation will help us cover the costs of Peg and her kittens and other cats in need. Thank you!